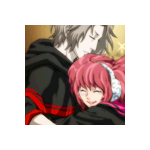 Hello, my name is Supersnazzi. I have been a fan of the Zero Escape series back when it first launched as the standalone title Nine Hours, Nine Persons, Nine Doors.

I currently reside in a cold, and snowy state called Michigan. I am not from Michigan though, I originally lived in the sunny, humid-filled Florida for sixteen years. I have two rescue dogs, who I love very much. I am enrolled in college under a social work program, but I am not going to use my degree to be a social worker. I will most likely use my degree to become a therapist.

Video games are a huge part of my life. Some of my favorite franchises include The Legend of Zelda, Ace Attorney, Yakuza, Final Fantasy, Pokemon, and the Tales of series. I play a lot of different series and I am always trying to find something new to fall in love with. On top of video games I also watch a lot of anime, and read manga as well.

My favorite characters from VLR

My favorite characters from ZTD

Retrieved from "https://zeroescape.fandom.com/wiki/User:Supersnazzi?oldid=46702"
Community content is available under CC-BY-SA unless otherwise noted.