Hello, welcome to my page! I am an admin and bureaucrat on this wiki, along with AlexShepherd, and if you need anything, don't hesitate to ask on either one of our message walls! Anyways, I have all different sorts of hobbies, including playing video games, basketball, football, and bowling. To wrap this up, I love working together with the users in our small community, and hope that we can make this THE place to go for Zero Escape information (If it isn't already). See you around!

I'm laid back and relaxed, but don't mind working hard to achieve my goals. I can always be found with a smile on my face, not letting other emotions get in the way. I have high tolerance for others criticizing or talking about me, as I believe in the old adage that words can't hurt you. Like June and Junpei, I have a penchant for humor of all kinds, and love to catch people off guard with situational jokes. During any form of competition (video games, sports, etc...), I love communicating with the competition and if I know them well, I'll engage in some friendly trash talk, if I can back it up (I almost always can).

Like everybunny on this website, I love the Zero Escape series and visual novels in general. My favorite character in the series is June. I love how well developed her personality is and was utterly shocked when such a nice, pretty, innocent young woman turned out to be Zero. Her naiveness and dirty mind gave me many laughs during the 999, including the elevator scene (dialogue was planned out perfectly!) and when Santa was examining her picture on the stairs in the steam engine room.

As for VLR, I was disappointed that she didn't appear as a playable character, and when it was finally time to meet her, she seemed a lot more cold and distant. I understand that it was for the good of mankind, but still. At least the "End or Beginning?" segment was there to finally meet her as her younger self again! Finally, I think ZTD wrapped up things nicely, and I was excited that we would finally get to experience a good ending for her. She retains much of her quirks from 999, and this helped made C-Team's sequences my favorite in the game. I'm really happy about how the proposal scene was executed and how the post ending files showed her and Junpei on the path to marriage, an outcome I've wanted ever since I first played 999.

Favorite Things In The Series

999 doesn't have voice actors, but I love voiceover videos on the game. 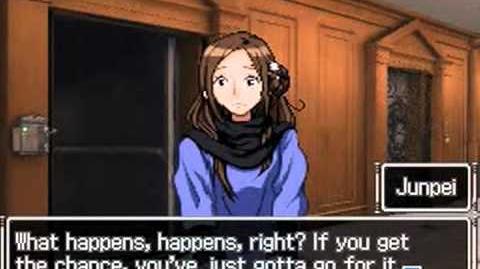 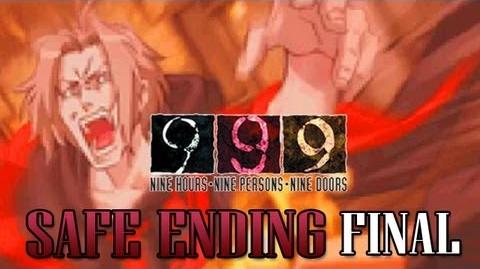 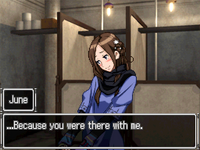 June's blushing is so cute! 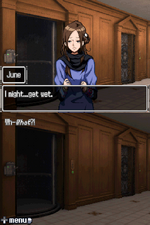 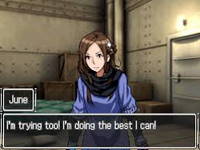 June after complaining about her looks. 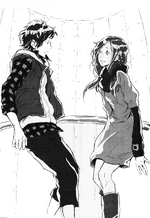 I wish this scene was in the game. 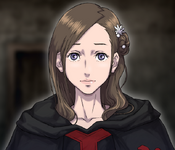 Great to see her return. 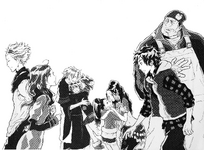 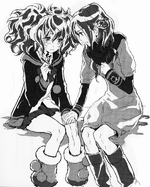 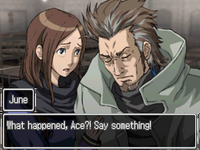 Her acting skills are too good. 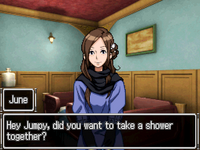 It's getting hot in here... 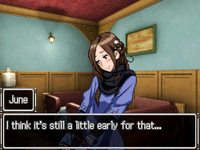 Junpei's thoughts: "It's never too early!" 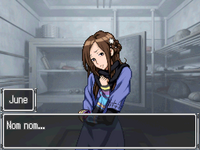 Are you eating the chicken or something else... 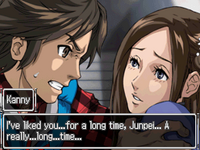 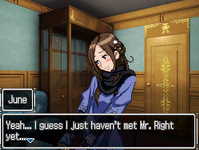 He's standing right in front of you! 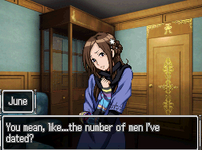 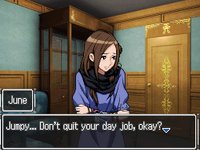 Nice comeback for Junpei's poor attempt at a joke. 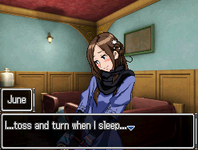 Can you imagine what's going through Junpei's head right now? 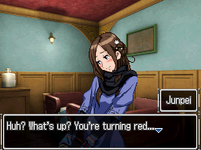 A great example of Junpei's ignorance. 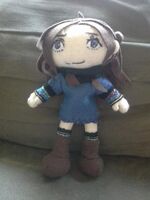 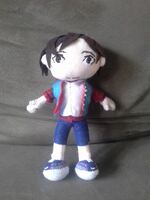 Another doll made by the same person. 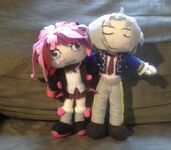 Yet more dolls made by the person.

Community content is available under CC-BY-SA unless otherwise noted.

Ranked #2
on this wiki