SPOILER WARNING
Every escape room article is spoiler-free to assist first-time players, but do not click any links on the article if you wish to avoid spoilers. Spoilers are also hidden in optional toggles.

"They all felt immediately that something was wrong. Nothing that could be easily identified, only a sense that something terrible shared the room with them..."

The Shower Room is an escape room located on the C Deck of the ship, behind Door 3. As the name suggests, it's a bathroom, containing showers and toilets in a tiled room.

The shower room is one big rectangular room, with tiled walls and floors. The room has a series of four to five shower-heads lining one side of the wall, with one drain on the floor.

It also contains 6 toilets on the other side of the room, each with a divider between them and a small waist-height door. There is an extra stall, without a toilet, that houses utility items, including brooms and buckets. There is a small wooden shelf on top of this stall.

The room entrance and exit doors both have an orange light above them, and there is a bloody corpse behind the divider. Next to the divider, the letters L L R L R L are written in blood, but the last three letters can only be seen by spraying them with luminol and turning the lights off.

After going through Door 3 among glares of betrayal and anger, Junpei, along with June, Santa, and Seven rushed into the shower room to find the DEAD. Upon entering, the room was pitch dark, and the floor was slippery.

After verifying their numbers on the DEAD, as the group started to calm down from their rush, they notice a vile smell in the room. Seven found the light switch, and upon lighting the room, they are welcomed to the sight of the shower room, along with blood splattered all over the front of the door they had just entered. Like the 9th Man, the cause of death was obviously an internal explosion. Junpei managed to examine it for long enough to note most of the state of the body, including how the explosion threw the left arm hard enough that it broke the bone and smashed the numbered bracelet into pieces. The body was so horribly destroyed that the only way to identify the corpse was by its clothes, which they recognized as Snake's. 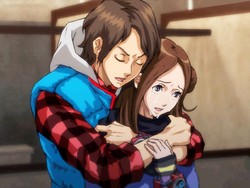 Add a photo to this gallery

Upset by his death, June has a mental breakdown from the sight, and screams eerily. She proceeds to bang on the exit door in tears, starts pulling her hair out, and asks what they did to end up in the Nonary Game. Junpei stops her, holding her until she has calmed down and reassures her that they will escape from the ship, he realizes that she is crying. After a long moment of comforting her, he sets her down to one corner, and starts searching the room with Santa and Seven to open the exit door.

After picking up the broom in the utility stall, June will speak up. She mentions an incident in their shared past where they were assigned to take care of the rabbits back in middle school one summer. The rabbits were mysteriously killed, and they spent the rest of summer hidden behind the rabbit hutch in hopes of catching the killer. Junpei says that the rabbit killers never appeared during that summer, but June is convinced that them hiding there stopped more rabbits from being killed. Junpei states that that summer with June was one he would never forget. June reminds him that he only volunteered to help with the animals after she did, and is convinced it was because he wanted to be with her. Junpei unconvincingly denies this, knowing that that was exactly the reason why he volunteered.

While unscrewing the thermometer, Santa will strike up a conversation with Junpei, speaking rather cryptically of the temperature in which human body cells start dying (107°F), mentioning that it might only get to that temperature if locked in a sauna or in an incinerator.

A broom with cuts on the handle that spiral up the shaft. It can be found on the left-most stall of the room - the one without a toilet in it. Seven also uses this broom to keep the exit door open.

An old metallic bucket made of tin with a simple metallic rod as a handle. It can be found on the left-most stall of the room, along with the broom. Apparently, it's the same kind of bucket used when June and Junpei were in elementary school, when Junpei was given a sponge and a bucket like this to clean up the paint he spilled in class.

A roll of toilet paper with some sort of strange red marks on the paper. It can be found on the small thin shelf on top of the left-most stall, one of five rolls of paper there. Seven suggests it might be a Scytale Cipher, where one wraps the paper along something, and then writes the message where the paper overlaps, where upon unwinding the paper, the message disappears.

Combines with broom to form broom wrapped in toilet paper

A white spray bottle, with a faded label spelling only 'Lumin-'. It was used by the police to detect the previous traces of blood, according to Seven. It can be found on the small thin shelf on top of the left-most stall, inside a wooden box beside the rolls of toilet paper.

To see the full article for luminol, click here.

A small screwdriver with a red handle. It can be found in the toilet tank of the middle stall. It is used to unscrew the thermometer from the wall.

A thermometer found screwed to the wall. It can be obtained by using the screwdriver on it. The thermometer only goes up to 107 degrees Fahrenheit, or 75 degrees Celsius. Replacing the numbers at the higher end of the thermometer is a small block of red, with white letters that spell 'OPEN'. Placing it under the shower heads after Junpei turns the valve on, and making the temperature reach the "OPEN" level will make the thermometer open, giving him a piece of paper.

A piece of paper

A piece of paper found when the thermometer unlocks. It's a simple strip of paper, with a small string of equation written on it in black. This is one of three parts of the equation Junpei must find to open the exit door.

A key card, half red and half black. It's found in the right-most stall, in the toilet tank. This is used on the card reader for the exit door.

A key card, half blue and half black. Unlike the red key card, this one also has a symbol on it, making it double over as a planet key. The symbol is the Mercury symbol. This card can be found when Junpei over-floods the drain after solving the valve puzzle, where it was previously stuck behind the drain and out of reach. It must be scanned in order to unlock the exit door.

Wrapping the toilet paper along the shaft, going along with the spiral carved into the handle, reveal the Scytale Cipher Seven mentions. The hidden message turns out to be "634+", written in red. This is one of three parts of the full equation Junpei must find.

Created by filling the bucket with hot water from the shower head.

After switching on the valve for the water system, Junpei can use the bucket to obtain some hot water. He then needs to pour it down the toilet tank in the middle stall, and flush it before the message behind the tar will be revealed.

Use the Luminol on the wall with the blood letters, near the exploded body. Press the light switch next to the letters to reveal:

Go over to the showers and open the panel in the wall. Change the valves so they match the pattern that you found in the previous step. L means left and R means right.

The lock at the exit is both a card reader and a keypad. In order to open the door, Junpei must have both the blue and red key cards, and input the correct code to open the door.

For the card reader portion, it must be done with the Red key card first, followed by the Blue key card. After doing so, the keypad would start functioning, and Junpei must enter a four digit number to unlock the door.

The numbers can be found by simply adding the three string of numbers hidden around the room together. The calculator is very helpful when adding up the numbers.

Examine the entrance door after getting the exit unlocked:

Retrieved from "https://zeroescape.fandom.com/wiki/Shower_room?oldid=59923"
Community content is available under CC-BY-SA unless otherwise noted.