The Featured Articles are articles that have been identified as representative of the finest and highest quality articles that this wiki has to offer. This archive lists all articles that have been featured on the Main Page. This status however, is not permanent. If an article is found to no longer meet the high-quality standards that a featured article should be, then it can be subsequently removed of its status. 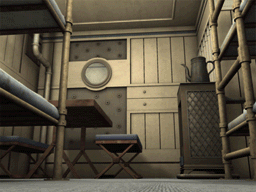 The 3rd class cabin is an escape room located on the D Deck of the Gigantic, and where Junpei first wakes up in. As the name implies, it is an economy suite containing simplistic and unfurnished designs and furniture. This small and oppressive room can support up to 6 people. After Junpei orients himself and quickly examines the room, a torrent of water suddenly pours into the room at an alarming rate from a newly broken window. As the water level in the room continually rises, Junpei is forced to seek a way out before he drowns in his watery prison. (more...) 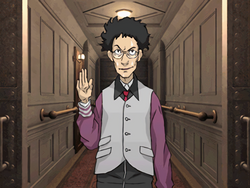 The 9th Man is first seen along with the others at the central staircase. According to Junpei, he had hair like a bird's nest. After investigating the reachable areas of the ship and reporting their findings, the group decide code names for themselves. However, the 9th Man does not comply, and remarks that he doesn't need one because he has a plan to get out. When Clover asks what his plan is, he reveals it to her: he quickly grabs her and holds a pocket knife to her neck, telling the others to get back. After forcing Clover and Ace to verify their bracelets at the RED next to Door 5, he tosses Clover aside and verifies his own, creating a digital root of 5 and allowing himself to pass through the door alone. However, after 9 seconds, the doors automatically shut. Now trapped and unable to deactivate his bracelet at the DEAD on the other side, the 9th Man quickly realizes his mistake and becomes the unfortunate first victim of the Nonary Game. (more...) 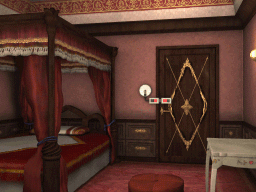 The 1st class cabin is an escape room Junpei can access along with Seven and Snake if he chooses to go through Door [5] instead of Door [4]. The room provides furnished, refined and upper-class atmosphere and entertainment, in contrast to the horrifying remains of the unfortunate 9th Man past the hallway of the numbered door. The suite consists of a relaxing living room, a similarly sized bedroom, and a hallway connecting the bedroom and living room to other rooms. The trio must find a way to open the lock on another door in order to continue. (more...) 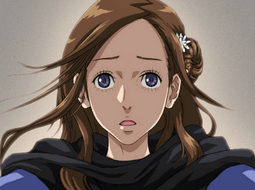 Akane Kurashiki, also known as June, is one of the nine players of the Second Nonary Game. The number on her bracelet is six. She is twenty-one years old, and is childhood friends with Junpei. She seemingly has romantic feelings for Junpei, whom she has affectionately nicknamed Jumpy. She is first seen coming down the central staircase, shortly before Zero's announcement. Junpei goes towards her to try to identify her, but a violent rocking of the ship causes her to land on top of him. They both recognize each other, despite not having seen each other for 9 years. (more...)

Zero III is the facilitator of the Nonary Game: Ambidex Edition in Virtue's Last Reward. He is an artificial intelligence created by Zero Sr to run the Nonary Game. He explains the rules of the game to the participants and claims not to care about the safety of the players. Throughout the game, the players refer to him as Zero Jr, to not confuse him with the mastermind Zero behind the game. He was created based on an incident that occured when Akane Kurashiki was young. (more...) 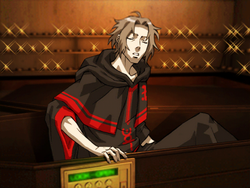 Light Field, also known as Snake, is the older brother of fellow player Clover. He is blind, but has great hearing, and wears the bracelet number 2. During the Second Nonary Game, he goes missing while searching for the missing pieces of the RED's for Doors 3, 7, and 8 and is believed to have been killed by Zero when a body is found behind Door 3, wearing his clothes. However, Zero had switched his clothes with another man and hid the real Snake in the coffin, located in the chapel. (more...) 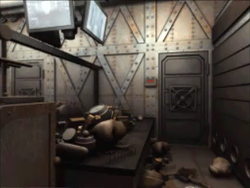 The Study is an escape room in Zero Escape: Nine Hours, Nine Persons, Nine Doors that is located on the Bottom Deck behind the Library and served as Zero's workshop. Junpei visits this room with Snake, Seven, and Clover, and it is the final escape room in the game. It features several puzzles recycled from the chart room and the captain's quarters, as well as containing a coffin that supposedly held an ancient mummy. (more...) 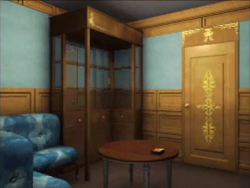 The 2nd class cabin is an escape room found by entering Door [4]. It consists of two fairly well furnished twin cabins on either side of the same corridor: rooms [B92] and [B93]. Junpei, Santa, June and Lotus enter them in order to find a way to open the Mars lock. They split up, and Junpei and June search room [B92], while Santa and Lotus search room [B93]. Notable conversations during the search include June's constant flirting with Junpei, and Santa and Lotus' never ending bickering. Furthermore, Junpei serves as a "bridge" between the two rooms, going back and forth to search for clues and items. (more...)

Clover Field is a pink-haired young woman and is one of only two characters to have played in all three Nonary Games. She is the younger sister of Light, and the two care for each other deeply. She is a capable SOIS agent, chosen because of her Esper abilities and works under Alice, her best friend. Her personality varies a lot depending on the situation that she is placed in. Most of the time, she is bubbly, hyper, and cheerful, but when things take a turn for the worst, she gets angered, depressed, and defiant. By the end of the Second Nonary Game, she has become more mature and down-to-earth. (more...)

Chromatic Doors are doors that lead to the escape rooms in Zero Escape: Virtue's Last Reward. There are 9 different varieties of them in total: Magenta, Yellow, Cyan, Red, Blue, Green, and White. Only solos or pairs who have bracelets that match the color of the door may go through them at first, but after clearing the escape room behind the door, any player may freely go through them. Just like the Numbered Doors, they have a huge impact on the participants' fates. (more...) 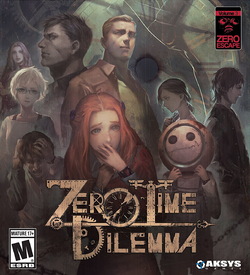 Zero Escape: Zero Time Dilemma is the third and final installment of the Zero Escape trilogy and sequel to Zero Escape: Virtue's Last Reward. It is developed by Spike Chunsoft and published by Aksys Games in North America and Europe. It was released for the Nintendo 3DS, PlayStation Vita / PlayStation TV, and PC on Steam in June 2016. The game is digital download only for Europeans. All versions of the game feature English and Japanese dual audio. The game's genre is a mix of psychological horror, mystery, suspense and thriller. The gameplay is a mix of escape-the-room and puzzle. (more...)